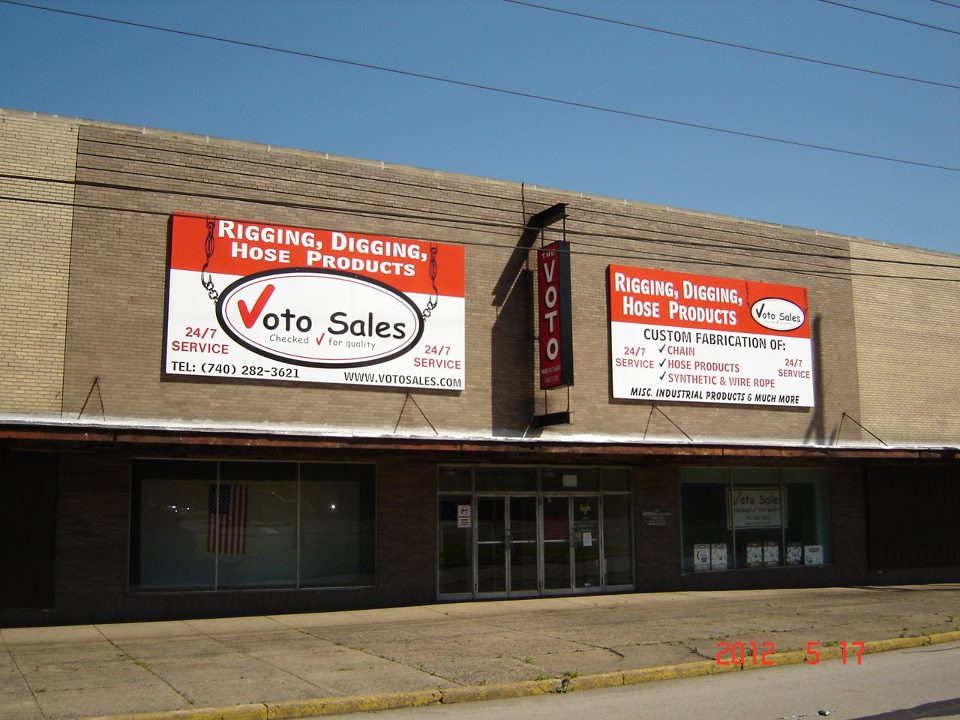 Just before World War II, on April 14, 1938, Harry H. Vogelsong, with the assistance of his wife, Dorothy, decided to establish a new business enterprise. His previous experience had been as a Manager of Operations and Sales for the Follansbee Steel Corporation in Toronto, Ohio, and Follansbee, West Virginia. Therefore, it was natural that his business would be geared to selling products and services to this industry in the Ohio Valley area around Steubenville. The operation was named The Voto Manufacturers Sales Company, which was derived by joining the first two letters of Vogelsong (VO) with the first two letters of his hometown, Toronto, Ohio (TO).

Initially, the business functioned as a manufacturers agent from an office on the ninth floor of the First National Bank Building at Fourth and Market Streets in Steubenville. It was soon apparent that selling heavy maintenance products by way of manufacturers direct shipments to customers was not providing the level of service originally intended.

Early in the 1940’s, arrangements were made to lease warehouse space, acquire a delivery truck, hire a driver/warehouse employee, and organize a shop floor for the processing of cut lengths of wire rope. This has been and continues to be a principal factor in the growth of the business.

Voto’s growth was also in part due to the rapid growth in the number of open pit coal mines forming to serve the war effort. To have a local source that would cut to length (customer specifications) and deliver to the job sites the wire rope necessary to operate the earth moving machinery was a novel and welcome service to the mine operators. Business soon expanded to customers within Ohio, West Virginia, and Pennsylvania.

Early in the 1950’s, a major customer moved its mining operations to Southeastern Ohio and invited Voto to provide a source for its supplies. This necessitated the formation of a branch office and warehouse in this area.

Property was purchased on Webster Avenue in the Steubenville area at this time. The Webster Avenue property, along with building additions and other property leased in the neighborhood, served the Company’s needs until a major move was made by the purchase of the former Sears, Roebuck and Company property at 500 North Third Street in July 1977. Voto’s main facility remains at this location today.

Late in the 1950’s, continued expansion of customers in Western Pennsylvania made it necessary to establish a branch office and warehouse in Clarion, Pennsylvania, in order to service customers properly. Additionally product lines were added, principally industrial lubricants, industrial rubber products, and hydraulic hose and fittings.

It was during this period that the opportunity to own stock in the Company was offered to employees wishing to participate. This led to further involvement in management and ownership by employees who then became officers and members of the Board of Directors. Harry H. Vogelsong, the principal stockholder, retired in 1976. In 1981, the Company was organized into an Employee Stock Ownership Plan (ESOP), which provides for employees pensions. Additionally, as an ESOP, each employee is an owner-participant in the Company.

Corporate History, Made to Order

Whenever you are in need of made to order services, come to Voto Sales. Whether you are in the Steel Industry, Coal Industry or Power Industry, we have the tools for it all. In the event that you are getting ready for your next project, start off right.

Due to the sudden rise in the Steel Industry, the made to order products are on the rise. Because of this, Voto Sales is here. As a result, our Corporate History of products for both the Coal Industry as well as the Power Industry are even stronger. At the end of the day, whenever you are looking for these types of materials our team is here for you.

As a leader in the industry, Voto Sales has a Corporate History for quality. On the whole, each creation goes through a process that strives to find any possible problems. In the event that something were to go wrong, contact our team. The coal, power and steel industry are major hitters in this type of field, and Voto is here for them.

At the end of the day, whenever you really need to find made to order, as well as top quality products, Voto is here. Instead of going into a shop of people that don’t have a clue, go to the best place. If you are in the Power Industry, the Steel Industry or the Coal industry, with a strong Corporate History, don’t look anywhere else but Voto Sales.